Is there any product that can cause death when used as directed? Well, experts say that the product is tobacco. An advert that was aired on TVs for the American citizens used the model of Shards O Glass freeze pops. This was aimed at creating awareness to the American society about the paradox seen with commercial tobacco adverts that direct a person how and why it’s important to smoke. Despite the fact that the companies have the open truth about the effects that come as a result of smoking, they still go ahead to place adverts in favor of their products.

Probably you could be wondering what Shards O’ Glass freeze pops are and the concept behind them. Well, glass freeze pops are tiny pieces of sharp glasses that when consumed can cause death or a serious harm to the body. The so-called freeze pops are used to illustrate how a product can be compromised and later be turned into a consumer product. 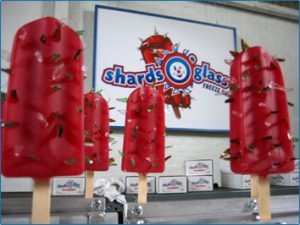 The glass freeze pops are sharp and according to Arnold, who is behind this advert, he imagines a person feasting on an ice filled with this glass pops that are sharp. In normal circumstances, this amounts to consuming a weapon at your own will that can cause death. He further relates this concept to a person using tobacco and states that the consequences are clear, but as the marketing, advert puts it, many people miss the negative outcomes of smoking.

A campaign dubbed ‘truth’ campaign in association with the American Legacy Foundation and Arnold worldwide Bolton was behind this concept.

That advert creates a chill for the lovers of ice. These ads are believed to be real, but the glass freezer pops could be an imaginary idea. It’s only used to bring out the truth about the advertising companies and how they can sell a product to the customer without exposing the truth.

The future of the Shards O Glass freeze pops advert

You could be wondering whether this advert is deemed to lose value or get extinct. Arnold and company won’t let you down. Since the cases of smoking among the youths and the middle-aged people is still a problem, more ads are being created.The last advert was aired in2004 and a decade after, the same ad has been aired. There is a speculation that the ads will be aired more frequently to create more understanding of the paradox brought about by the advertising companies.

Glass freeze ice pops are only for adults. Really? This statement at the end of the advert left American citizens wondering. The advert has been designed in a hilarious way, hence, anyone watching it would  be tempted to repeat several times. The real truth behind the advert is compelling and since it’s well researched, the information reveals a lot.

In conclusion, Shards O’ Glass freeze pops is an advert that needs to be aired always as it has the whole truth when comparing the tobacco to other products on the market. What if they were sold the same way tobacco sells? Then the whole world would be dead.